My very close friend from Baltimore, Molly, arrived in Dublin on the 2nd.  I hadn’t seen her since my trip back home last May.  We began that Thursday night by trekking across the city to drop my dog off at the sitter’s in the Kilmainham area.  I told her it would be a long walk, but she hadn’t imagined long meant five miles, so needless to say she was a bit frazzled and ready to plop down at the nearest bar after we said goodbye to Louie.  We had a pint at JR Stoutman’s where we continued to get caught up on all the things the other had been doing the past five months.  We keep in touch via text and have the occasional phone call, but the sad truth is it’s hard to stay updated when we’re not able to grab dinner at the local bar during the week or settle in for a long Saturday afternoon session together.  The ocean puts more than a physical distance between me and the people I love.  Time suffers comparably.

That night we hopped from bar to bar through the city center, ultimately settling at my new “local”, Blackbird in Rathmines.  Meeting up with my now coworker, a former bartender there, meant our pints stretched long into the night, past the time the doors were locked.  We got home late.  Friday I worked 7 am to 3 pm and was exhausted by the time I got home.  I packed my duffel, grabbed Molly’s backpack, and met her at the stop in town to catch the express bus to Belfast.  We had planned to go out that night once we were settled at the B&B but I was soon nodding off in the living room chair.  We decided to go to bed sober and start fresh for the next day.

After a quick breakfast, we hailed a cab for downtown Belfast and got on our tour bus.  I’m usually not one for guided tours.  I don’t like being told how long to spend somewhere or the fact that you are so obviously a tourist, moving as part of a greater mass that clogs up the local pubs and attractions.  But the things we wanted to see up North were not easily accessible by public transport and couldn’t be done nearly as efficiently.  The Paddywagon tour we ended up on turned out to be great.  Our guide was witty, told us about some great folklore, and gave us enough time at each stop so Molly and I could enjoy the sites and beers along the way.  We saw the Dark Hedges, fame of Game of Thrones (I am not a fan but it was beautiful all the same), braved the Carrick-a-Rede rope bridge as it swayed perilously in the wind, stopped for food at a pub in Ballintoy, walked in the footsteps of giants at Giant’s Causeway, then finally alighted at Dunluce Castle, not to return to the coach which was headed back to Belfast. 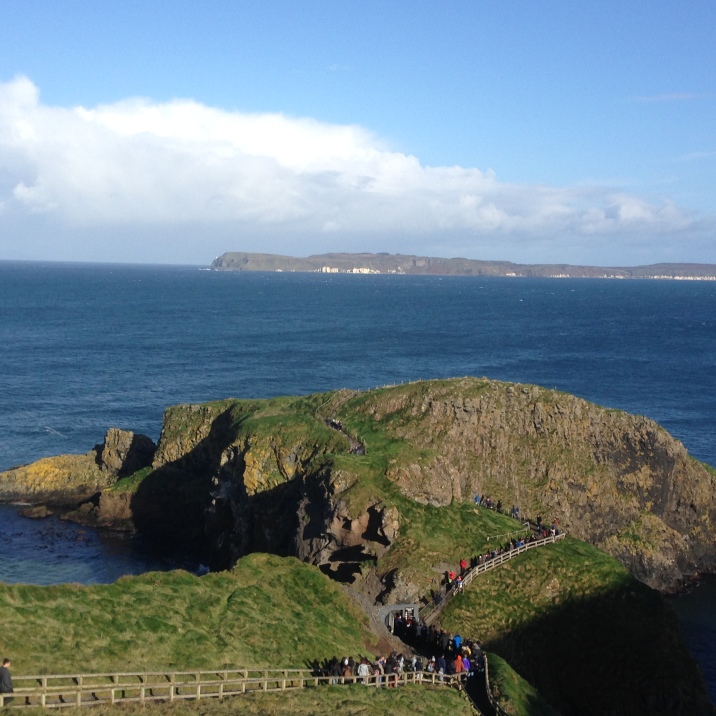 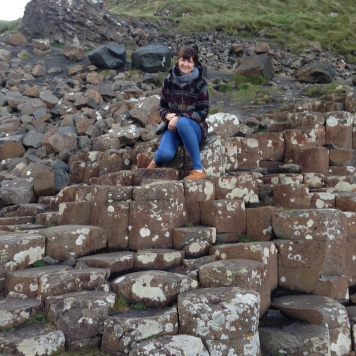 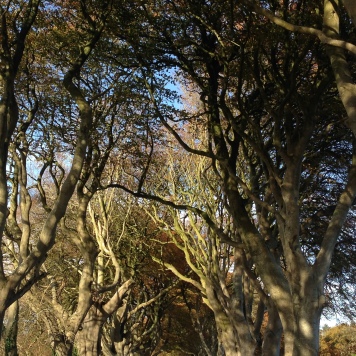 The plan from there was to get to Derry.  How, I had not quite decided.  I had the times of the bus and train we’d need to take to get there but after waiting in the cold and sharp wind for about fifteen minutes, I picked plan B.  Ripping out a small sheet of paper from my journal, I scrawled “DERRY” in block letters.  Molly held the sign while I stood thumb out to passing cars.  The first few drivers gave us quizzical looks.  Many were going too fast to even read the sign.

But five minutes in, laughing at the ridiculousness of it, we were surprised as an approaching station wagon turned on its blinker and pulled to the side.  We clambered to the back door and got in.  It was a couple, probably in their late 30s or early 40s, and they looked normal; as normal as you can gauge in the seconds you have while the car door swings shut.  I told them we were going to Derry but they could drop us anywhere convenient in between.  Lucky for us, they were from Derry and were headed home.  They’d be happy to take us all the way.  They hoped we didn’t mind stopping for ice cream.

Tom and Nuala were warm, had great senses of humor, and seemed to be genuinely amused by Molly’s and my stories about our antics and life in general.  We told them about how we met, the rocky beginning to our friendship (including a drunken almost-fist fight on a South Baltimore street), and the places we’ve been since then.  But what I was most interested in, and is always on my mind in the North, is whether they considered themselves Irish or British.  I don’t dare bring it up, but it’s almost as if they could see it burning on my brain.  They told us, if the sign had said Londonderry, they wouldn’t have picked us up.  Joke or not, I knew where they stood.

They dropped us at our B&B, just outside of the city center, and we thanked them profusely for their trust and time; little moments like that remind you of the goodness and kindness of strangers that does still exist.  We waved goodbye as they pulled away and entering the quaint house, were met by the sweet landlady Peig.  The walls of the house were seemingly painted with family photos, pieces of art, and Catholic mementos almost from floor to ceiling.  After she showed us to our room, we took a moment to get our bearings before heading out for the evening.

We had heard from Tom and Nuala that Peadar’s (pronounced Padders) in town was great on a Saturday night so we began to work our way through the wet and chilly streets.  Spotting a bar called Ice Wharf and deeming it wise to have some food first, we slipped in and grabbed two lone stools at the end of a long bar.  Having our first pints with our dinner, a very drunk older man sidled up to us and asked if he could sit down.  The conversation was clunky but obviously enjoying himself, asked to buy us another round.  Not ones to pass up a free drink, we obliged but found ourselves increasingly annoyed with his repeat questions and even a little disturbed at multiple offers to stay at his house.  We chugged down what remained in our glasses, thanked him for the beers and chat, and hurried out the door.

It wasn’t long walking in the direction of the lights and noise that we found ourselves in a large square.  To our right were several pubs, the seemingly liveliest of them with a big sign painted in peeling red letters: Peadar’s.  Once inside it was humid, packed wall-to-wall.  We miraculously found two seats at the bar near the guitarist and sat down.  Almost immediately, a drunk young guy spilled a glass of water on the bar top in front of us, which trickled onto our laps like a small stream.  It was only 9 o’clock and everyone seemed well on their way.  We had some catching up to do, but the mood was raucous and the music good and loud.

Again, I wondered where the loyalties of this bar and its patrons lied.  The tunes the musician played were well-known to me from many pub sessions down south, particularly Grace.  Irish flags tucked into corners, a Celtic knot tattooed across the bartender’s forearm; they all spoke their allegiance.  We made friends with a particularly drunk and animated guy and later in the night after he and I were both sufficiently sloshed, I casually asked if it was a nationalist bar.  He sat up straighter, looking slightly taken aback by my question.  “Of course it is!” He said, a look of pride in his eyes, his fist coming down on the bar top.

It was slow going the next morning working through the hangover that was heavy on our brains, weighing down our limbs.  When we finally got showered and made our way into town, it was 2:30 pm.  We stopped in at the Ice Wharf again for a late lunch and a little hair of the dog then meandered to the mall where the walking tour was to start.  It was a small and intimate tour, only two others joined us and the guide.  He started out telling us the history of Derry as a key port city over the centuries but as he worked up to modern times, the politics were unavoidable.  Our guide was upbeat, impartial, and highly optimistic.  Relations between Protestants and Catholics had come a long way and were getting better by the day, he told us.  I couldn’t tell how much of it he believed himself or what he said for the benefit of the tourists.  When I questioningly pointed out some Unionist propaganda on a wall, he seemed keen to brush it off and move on.

If I haven’t made it clear up until now, the history and modern struggle fascinates me.  At the end of the tour, he pointed down to the Bogside, the Catholic part of the city, and told us about the murals and how they had been reworked in recent years to acknowledge the progress made toward peace.  I wanted to get a closer look so after the tour ended, I parted ways with Molly and took off down the hill toward the Bogside.

It was dark and I was aware I looked out of place.  Several men standing outside the Bogside Inn pub, having a smoke, watched me curiously.  Aside from the murals, there was graffiti and posters calling to, “end British internment” and “free Tony Taylor.”  On the side of the Free Derry corner, in black spray paint it simply read, “IRA!”

I got some pictures and walked slowly back up the hill to the city’s walls.  My mind was racing; how strongly religion, culture, and place itself can separate us.  That the notion of belonging to one piece of land or another defines us, shapes us into who we are and what we believe.  These ideas are alive and well in not only Derry but across the island as a whole.  It may not be a topic fresh on the tongues and minds of everyone, but it causes fierce division among those invested in it.

As we took the 7 am direct bus back to Dublin the next morning, I watched the lights of the Bogside fade away in the distance.  Crossing the River Foyle, out past the largely Protestant neighborhoods of the city, and into the suburbs, I spotted, in big black letters spray painted onto the side of a wall: Ulster is British.  I couldn’t help think back to my final walk through town my last night in Derry.  I stopped to take a picture of the fair across the Foyle, its bright colored lights reflecting off the dark, flowing river that stretched out in front of me.  To the right of that, the Peace Bridge: physically linking the two communities but also symbolically a bridge over troubled waters of a city and country still divided.

2 thoughts on “A trip up North”

A trip down memory lane…