The first week has dragged on.  Almost to the point where at times it’s hard to believe that the clock is even advancing at all.  I spend the days ping-ponging between feeling a frantic need to be productive and letting myself succumb to the stupor of this house arrest.

The pigeons feel it, too.  Their reflexes are slow, lazy.  Maisie’s attempts to catch one are getting too close for comfort.  I come home from our perfunctory, robotic outing and add birdseed to my grocery list. 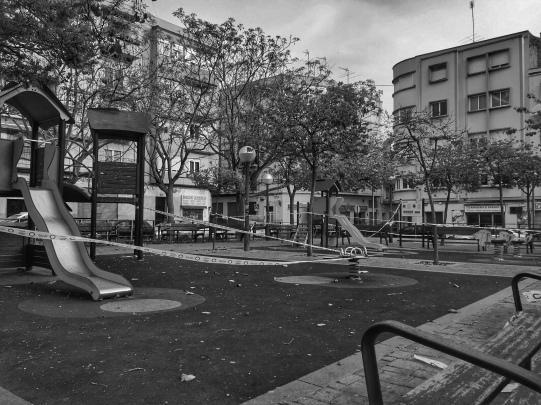 I’m trying hard to keep myself occupied.  I bookmarked about a dozen MOOCs I want to take.  I do my daily Dutch lesson.  I watch old and new shows on Netflix.  But it gets to the point where it all seems like I’m going through the motions rather than engaging in these routines because I want to.  When I was working, coming home to this was a treat.  I was contented laying around all weekend after an exhausting week.  I felt I had earned it.

But ‘too much of a good thing’ is a saying for a reason.  When there ceases to be a reason for the reward, the reward loses its meaning.  I’m bored with it all.

The Ayuntamiento de Alicante, or city government, has been what almost amounts to bragging on Twitter about all the fines the police are handing out.  I know it’s a method of social control to try to scare people into staying indoors.  With the way the cases and deaths keep rising here, I suppose it’s the least they can do.

This past Wednesday I had my doctor’s appointment via phone but had to go into the medical center to pick-up my prescription.  On the walk home, I felt the watchful eyes of the police on nearly every corner.  I had my consultation print-out and prescription in hand should I be questioned.  It was a surreal feeling.  I’ve never grown up in a society where my movements were restricted, where I felt guilty for simply existing.  This change is situational for the time being.  And of all the things I could have felt in that moment, I felt grateful for that fact.  For people in other parts of the world, this kind of surveillance is their normal.

Despite these flashes of gratitude, it’s still hard to live with such uncertainty for the future.  I have an important interview on Tuesday morning that will change the course of my life for the better but there are still so many questions.  Only time will tell how it will all work out.

I’m sure this time of quarantine will force a lot of people to rethink and reevaluate a number of things.  I relish a learning opportunity, especially one that pertains to myself, but I find that I’m not loving all of the conclusions that I’m reaching.  Being forced to confront this boredom and desperation and dissect it has been hard.  I realize that the perceived need to be entertained is problematic and I’m trying to take more time to sit in silence.

Isolation has proved to be a veritable boxing match in my own head.  But I suspect this one is going to last for more than twelve rounds.

A trip down memory lane…